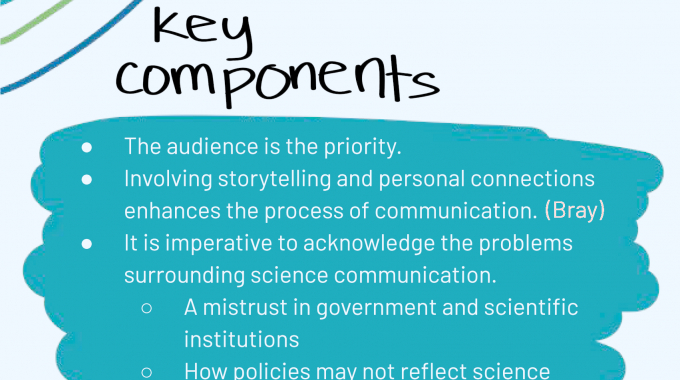 The Center for Critical Public Health had the pleasure of sponsoring Vaishnavi Kurupath as a 2022 Summer Intern. She was tasked with conducting a narrative literature review on Science Communication for the CCPH. Vaishnavi is currently a senior at American High School in Fremont, California, and interested in studying intersectional approaches to public policy in college next year. The images in this post are adapted from a presentation on science communication that she created during her internship.

Modern media and entertainment have been saturated with pandemic-related content; from news articles to reality TV shows, the subject never seems to leave us. The COVID-19 pandemic has created significant  challenges, but there is also much to learn from this situation, especially in how it was handled and introduced. Specifically, the chaos and misunderstandings of the “early age” of the pandemic revealed shortcomings in how the government and scientists communicate with the public. In other instances, appropriate measures were taken by authority figures and institutions that demonstrated effective science communication. Science communication, as an area of study, is expanding; and the handling of the pandemic has shined a light on some important features.

Effective science communication revolves around the audience. This is not to say that the audience is the sole star of the show, but the qualities and identities of the audience matter significantly in how messages are received. Traditionally, science communication operated in a “deficit model,” where scientists relayed their message in a one-way stream of communication. However, as time progressed, a two-way model became preferred; this allowed the audience to engage with the information and better process it. During the pandemic, information around COVID-19 was disseminated through many forms of media, notably social media; a lack of consistency led to lots of misinformation being propagated about the science and social effects of the disease. Many authorities and scientists failed to account for the diversity of the American public and how certain groups have had a historically negative relationship with health officials and public health campaigns. Their mistrust was countered with claims of ignorance rather than a sense of understanding or empathy. To improve the channeling of information, scientists must recognize a clear audience or number of audiences and understand the cultural and social contexts in which their audience will process the information. Thus, messaging has to be tailored to the sensitivity of different target audiences.