Participants are well aware of the risks associated with tobacco use, but also acknowledge that it can be a valuable tool in navigating challenges in their lives, including managing the risks posed by other substance use. There are various ways that cigarettes can be meaningful for people who use them, as documented across many studies in the tobacco field.

For example, Rob is a 19-year-old white, pansexual, nonbinary person studying to become a drug counselor. Before moving back to the Bay Area in 2020, Rob was using meth heavily and had an experience with an overdose — this and the death of a close friend greatly impacted their decision to stop using meth. About the role of cigarettes in their life and their health, Rob explai

I mean, I think, the cigarettes – it was like, it helped me so much with getting sober from that because I could chain-smoke all day instead of smoke meth. […T]he oral fixation that comes with smoking meth, and just the actual action of it is so addicting. […]I know at some point, I’ll probably have lung cancer or some form of that. I mean, I’ve smoked a lot of things that are worse than cigarettes. So, it’s definitely done some damage, and you know, smoking like, a pack a day is not healthy. And so, I definitely know that at some point down the line, my lifespan will be shorter than if I didn’t smoke. […] I’ve cut back from a pack a day to half a pack a day in the past couple months, and there’s that. But at the same time, I never really thought I would get this far in terms of living and stuff. So, it’s kind of like, whatever at this point. Like, at least I’m not smoking meth or something.

For Rob, cigarettes are an important part of getting sober, particularly in their ability to continue the embodied practice of smoking yet with a drug substitute that is less harmful than methamphetamine. Still, Rob clearly understands that their frequent use of cigarettes has negative health risks, such as cancer or reduced lifespan in the future. However, in cutting back on cigarettes but still using them to replace smoking meth, Rob is practicing tobacco harm reduction while also using tobacco smoking as a meth-related-harm reduction strategy. Relative to the immediate risks of meth use, and within the context of a precarious relationship to future survival, quitting cigarettes is not Rob’s top priority right now (‘it’s kind of like, whatever at this point’).

Another participant, Jen Zee , a 20-year-old white, bisexual, cis man, reflected upon his NT use as it related to stopping other drugs. At the time of the interview, he was 84 days sober and attending Narcotics Anonymous meetings after experiencing an overdose from ketamine. Jen Zee discussed his use of NT products and being sober like this:

I just feel like it’s gonna keep going for a while. A couple people have told me that I should focus on the other substances within my first year of being clean before I tried to knock out cigarettes. […] I think it’s kind of like a crutch because I’m so used to having no feelings, or just a high in place of the feelings. And so, that little rush is like, what I’ve replaced […] those with.

Jen Zee’s use of cigarettes is similar to Rob’s and some other participants in terms of their role in quitting other substances, where the cigarette becomes, in essence, a harm reduction tool for abstaining from other substance use. This is of particular importance because, like Rob, Jen Zee isn’t irrationally using NT products but instead, he is actively negotiating multiple kinds of risks and using tobacco strategically for harm reduction.

For younger people or those newer to smoking, the use of cigarettes is commonly associated with future risks, whereas for other substances severe harms (e.g., overdose) may be more immediate. Both Rob and Jen Zee experienced immediate harm in their substance use that contributed to getting sober from meth and ketamine, and cigarettes offer them not only a substitution, but one that may carry fewer risks in the here and now.

The risks and benefits of different substance use vary not only between substances and over time, but also by situation and structural context. For example, Ana is a 21-year-old Latinx, nonbinary, undocumented student who recently started substituting cigarettes for cannabis. Ana discussed their previous use of cannabis as a tool for making it through the pandemic and as a large part of their social life. However, after experiencing a traumatic event and subsequently being shamed by their family and stigmatized by police officers for their use of cannabis, Ana’s experience of cannabis use shifted abruptly and became harmful, leading to severe panic attacks. This impacted the role of tobacco use in their life:

[…W]hen the traumatic thing happened to me in December, I interacted with the police to file a police report, and you know, they asked a lot of questions about just like, my substance abuse and stuff. And yeah, they were – I think they were very like […] judgmental. … They dismissed my case. They just made it out to seem like I was just like, crazy […]. So, it wasn’t until that experience that I realized that like, I need to stop smoking marijuana. ‘Cause it just like – That’s also when my family found out how much I smoked, and their view was also negative. So, it was just a lot of like, shame from the police and shame from my family that I felt. […] It was really bad. I was hospitalized like, four times in that month because of my panic attacks. They were really bad. […] And yeah, so, after that experience, I – I went cold turkey, and I just stopped smoking marijuana. […I]t was after that that I was like, Oh, well, if marijuana makes me have panic attacks, maybe tobacco won’t. And I did try it. I tried smoking tobacco, and I felt fine. So, after that, I was just like, smoking tobacco to substitute for the marijuana.(Ana)

Following trauma, Ana’s use of cannabis posed mental health consequences that they do not experience with tobacco use, so substituting cigarettes for cannabis was useful not only for avoiding exclusion in social situations where their friends were still smoking cannabis, but more importantly, substituting cigarettes helped Ana prevent repeated hospitalizations after stigmatizing experiences impacted their drug use. The stigmatization Ana experienced in relation to their cannabis use is critical to consider as another kind of harm that tobacco was useful in reducing. This stigma kept them from receiving adequate support and subjected them to judgement. Cigarettes certainly carry their own stigma; however, differences in racialized historical criminalization and perceived drug effects may make tobacco use more acceptable in instances where other forms of intoxication may not be. The possibility that NT use may pose more manageable risks than other drugs in particular situations is worth further consideration, especially since legal availability and expectations of non-impairment may make NT products particularly accessible substitutes for other drugs.

For Rob, Jen Zee, and Ana, compared to other substances with known risks, the risks associated with smoking cigarettes are preferable. The narratives shared here suggest that cigarette smoking can be an appealing substitute for people using substances that may have more immediate health consequences (e.g. overdose and death). Additionally, the risks posed by NT use are assumed to occur after long-term use, which could impact potential strategies for harm reduction that may differ from substances that have more immediate risks. These narratives highlight the necessity of broader interpretations of what harm reduction is to the people who practice it, as well as the complex ways people engage in it.

With limited access to harm reduction resources, people create and engage in their own harm reduction practices. The differing strategies participants employ in pursuit of wellbeing reflect the importance of further emphasis on harm reduction as a person-centered practice that can supplement existing prevention measures. An overwhelming emphasis on cessation in many mainstream discussions of nicotine and tobacco use can be ostracizing to people for whom quitting is not possible or not appealing. Though cessation may be a long-term goal, it is not the only valid goal; considering the present-day lives of people who not only use nicotine and tobacco but also use other drugs makes this especially clear. 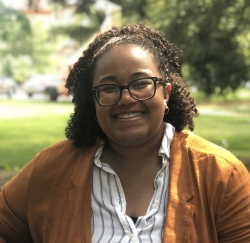 Elaina Peterkin
Elaina started as a research assistant on the Tobacco Harm Reduction study in 2020. She spends her time conducting interviews, cleaning transcripts, and coding data. Elaina has a Bachelor’s Degree in Sociology from Vassar College. In her time there she focused on implications of incarceration for Black queer women & femmes, as well as care as a tool of liberation.