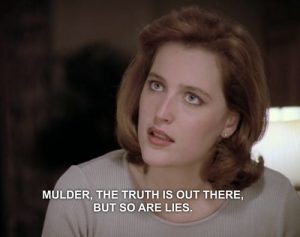 But while influential figures on all sides of the e-cigarette debate in the US have increasingly acknowledged a body of evidence that vaping is less harmful than combustible cigarettes, the US public has increasingly come to believe the opposite. It’s unlikely that this outcome results from even-handed cautions against jumping to conclusions. People have been inundated with a particular message about the current state of research on vaping, and that message is false.

Many of the young people who vape that we interviewed here in California expressed dismay and confusion at e-cigarette “propaganda.” They wanted public health messaging to “be more rational” about vaping, so they could rely on it to inform their own decisions. Instead, they felt that many public health campaigns employ scare tactics to wrongly imply that e-cigarettes are at least as harmful as combustible cigarettes. Such campaigns were not only perceived as sensationalized and unreliable, but they did not present information relevant to our study participants’ interest in vaping as a way to quit or reduce harms from smoking:

They’re trying to say [vaping] is not any better… Like “sure, e-cigs are healthier if inhaling toxic chemicals sounds healthier to you“… It’s just misleading. It’s not really educating the public about the reality of the situation.

Of course different stakeholders may have different takes on “the reality of the situation.” As researchers who study underrepresented perspectives on substance use, we spend a lot of time arguing for the consideration of multiple contexts and perspectives on reality. We don’t do this because we believe everything and anything to be true, but rather because engaging with multiple perspectives can make research more objective, as well as more responsive to people whose interests have often been discounted.

But while science need not represent the singular, static truth (as Karl Popper famously observed, scientific truth is distinct from certainty), knowledge about a body of scientific evidence at any given time is “out there” and knowable. In the case of e-cigarettes, some claims are better supported by the evidence than others.

There’s a section in the American Public Health Association’s “Principles of the Ethical Practice of Public Health” (pdf) that highlights how institutions charged with protecting public health can either nurture public trust or inhibit it:

The effectiveness of institutions depends heavily on the public’s trust. Factors that contribute to trust in an institution include the following actions on the part of the institution: communication; truth telling; transparency (i.e., not concealing information); accountability; reliability; and reciprocity. One critical form of reciprocity and communication is listening to as well as speaking with the community.

Notably, the points above are about actions, and the relationships institutions build with the people they serve. Institutional trust does not depend upon an institution’s particular understanding of “the” truth so much as it relies on truth telling. In biomedical ethics, truth telling refers to an active process for informing patients about a health condition. Where the paternalistic withholding of information from patients with terminal conditions was once accepted in the US, medical practitioners are now expected to tell patients what they want to know. Sharing information based solely upon what one presumes to be someone else’s “own good” is not truth-telling; to tell someone the truth is to be responsive to their concerns.

For some stakeholders in e-cigarette research, understanding vaping as “inhaling toxic chemicals” is perhaps the only meaningful truth at stake. But for many people, other concerns, such as how the risks of e-cigarettes compare to the risks of combustibles, are much more salient. When institutions neglect these concerns, or promote messages that reinforce rather than correct misperceptions of comparative risks, public trust erodes. We encountered this in the initial stages of our own research, when we found that people in an online vaping community did not trust us* specifically because of our connections to public health institutions.

Clearly there is disagreement in public health over the ethics and implications of various approaches to nicotine products. But public health institutions don’t have to agree on these issues in order to practice truth telling and be responsive to the people they serve. Even the most utilitarian analysis of public communication about e-cigarettes must account for impact on trust. Just as Americans are likely to regard the withholding of information from patients about a medical condition as condescending and harmful, our participants did not want to be patronized:

They could just say [vaping is] less harmful, right? … But then they downplay it again… And that’s like, we all know that. But it’s still healthier than the latter, than the cigarettes. So, just let me make my decision is what I’m saying. Give me all of the facts, all of the facts, and I’ll make a decision.