When we get to the photo elicitation part of the interview, she pauses over this image showing office workers standing outside a business development: a group of nonsmoking men are clustered in the background, while a woman stands apart from them in the foreground, smoking a cigarette. Tabatha says that her experience is “the opposite of that.” In the punk scene, smoking eases the path to friendship. People gather outside to smoke and talk, and non-smokers are relatively isolated (It would be strange, she notes, for a non-smoking stranger to join the group of smokers huddled together outside a venue).

She observes that the men in the photo look like a guy who yelled at her once when she was standing outside smoking in San Francisco. He called her a “murderer” for smoking on the sidewalk, she says with a nervous laugh. When she turned toward him, she was expecting to see someone “crazy”, but he looked like a business man, like the people in the photo. 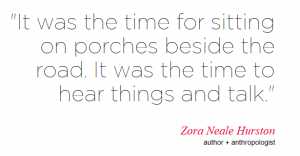 Tabatha says she feels more at home in Oakland. She doesn’t go to Pride in San Francisco anymore; she likes Oakland Pride. Oakland has a “porch culture” that lends itself to smoking. When you’re sitting outside to smoke: you talk. What else is there to do? When you’re sitting outside to talk: you smoke. What else is there to do? People in the house get to know each other better.

Unfortunately, Tabatha says, rents are going up in Oakland just like in San Francisco. Techies are starting to move in, driving up prices. Some of the tech people are okay, but most aren’t connected to the community; “they don’t give back,” she notes. These days the only way for someone like her to find affordable housing is to know someone. You need to have friends in the community, she says, to get into a reasonably priced share. That’s how she found her housemates.

Thinking about this later I wonder, would it be harder to her to find housing if she didn’t smoke? Clearly there are lots of policy pressures in play that are intended to reduce smoking at the population level (including bans on smoking in public housing) – but few of us lead lives ordered by public policy alone, and some of us deal with more competing pressures than others.

Follow
Rachelle Annechino*
Digital Media Research at Center for Critical Public Health
Rachelle Annechino is a graduate of the School of Information at UC Berkeley, an associate research scientist at the Prevention Research Center, and a founding editor of Ethnography Matters.