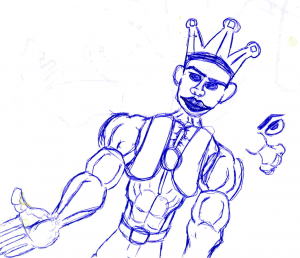 Earlier at the recruiting spot I’d had the most vocal brother with the neck tattoo giggling as I mumbled some unfortunate judgments about a sad-looking Santa nearby. “Oh, Lord, another one of these depressed-ass Santas walking around. Uh uh, you can’t be looking like dude in Trading Places, all torn down.” My colleague asks if I’ve seen the bar hopping Santas. I groan as the visual recall of the newspaper photo washes over me: Dozens of Santas in a bar cheering with steins of ale. I tell my colleague “Why don’t we all just dress up as the Easter Bunny and take our kids to the strip club? Do I really need to say that we don’t need to take our kids to the strip club dressed as the Easter Bunny? Why we have to rub our dirt in their faces all the time?” Neck tattoo chuckles, and I blush as I realize I’ve been heard.

They don’t know what to make of me – I look like half player, half-goody-goody – loosely-laced Timberlands with polished white trim, black velour jog pants, and a P-coat. I’ve chosen my garb carefully to hit notes which will suggest a recognizable, relaxed, and conservative style for who I am and appear to be – a Black American, visibly queer, educated working woman – and who we’re recruiting, 18-25 year old, Black, male, nonsmokers who will be hovering around downtown in the middle of the day and available right then and there. We’ve received feedback from online recruiting that people work during the day, so when we schedule groups at that time, even when people have previously expressed interest, it’s difficult for them because they’d have to take off of work.

Not everyone here is on a hustle. One guy is on holiday from university in the Midwest. He definitely spoke informally of a certain kind of isolation he feels there, and then he gets home (Oakland) and feels a relief wash over him to see other Black faces around and not feel isolated or regarded suspiciously.

As I walk along taking phone calls from teammates and potential respondents, I also realize I’m slightly regressed into my mid-20’s self when I was a little punk rocker (but as someone I dated at the time said in appraisal, thoughtfully scratching his stubble, “Well… certainly one of the cleanest punk rockers I’ve ever known.”) I sigh and shake the memories from me as I scan the street we walk for any trouble – police with an attitude or cars that might be stalking us.

“I been in the pen, for a year.” Brother’s last word hits a hard note of finality and bitterness, and I imagine the trauma he’s endured. I know my face contracts into pain for a moment, and I nod slightly to show him I understand that he has every reason to be nervous. “I got that – whaddaya callit? That PSD?”

“PTSD?” I ask in the same tone I’d use to ask if someone wants cream with their coffee. I realize there’s no reason for me to self-disclose our shared diagnosis. “Yeah, shit, I guess you would if you been inside.” 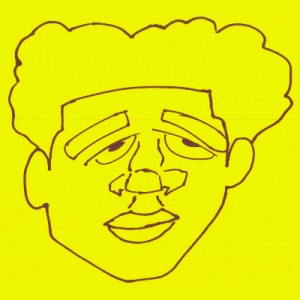 “Yeah. I mean, I’m not crazy,” he says hastily, and I nod quickly, “Naw, I hear you.” He continues. “Y’all probably know someone yourself or have family or someone inside.” I nod grudingly. He also doesn’t need to know I have family on both sides inside, but I’m thinking of them, and I imagine I look concerned. I’m thinking how I’m always praying against something happening to someone I love in jail and the courthouses, and I wonder if anyone loves him and worried about him.

“It’s kind of… an EXTREME environment,” he says, and I hear it – the masked pain, fear, doubt, anger and all the questions about the oddity of the situation. *Are you someone I can trust to be who you say you are?*

I’ve already handed out business cards, maps, and flyers. All I can do is stay heartfelt. “You know, in your situation I would be asking the exact same things. We’re going right there,” I say pointing to the building. “I know you have no reason to trust me, but I can only give you my word – we don’t want your real names, and we don’t want to look at your ID. We gon’ talk for an hour and Imma put $30 in your hand after that and you can go home or wherever you want…”

“Cash – that’s the good kind – easy, legal money to talk to us. We’ll ask you questions about your opinions of things. We’ll record it. That’s it. I know it’s unusual to be kickin’ it in the Plaza and have somebody approach you like this, but it’s a lot of lil’ surveys and things like this that anyone can do. Like at the school in Berkeley anyone can walk in and see what studies they might qualify for and just do they little survey, answer some questions – $15 here, $20 here… I fed myself one quarter that way one time.”

I’m thinking of the talk that soothes the mothers and grandmothers and fathers and sons that I know – we all like the best bang for our buck, and I try to speak of things I imagine their folks might have spoken of – survival, caution, risk, discernment. The talk of various low-risk ways to get money – even if personally impractical – seems to soothe a certain sensibility in the group, even as their nerves are rankled by the stout walk with strangers and what I imagine – tales passed down in songs and from friends about not ever letting yourself get lured somewhere alone by a female. Except they might not say, “female.” I’m grateful for Rachelle’s foresight of flyers and maps – it seems less like a set up if you hand someone a map you printed out from Google.

We corral them into our office, where they’re boisterously throwing around the N-word. It’s something I’ve never seen in our office before – Black men who don’t have to appeal to decorum. When I briefly relate the scene to another woman of color and affirm that even though there was a part of me that internally cringed, most of me was too amused to be bothered, she agreed that she would have been amused too. The scent of their cannabis and their talk of various hustles and women in the taciturn offices we work in sets up a convergence of worlds that strikes me as hilarious. I leave them briefly to prep, barely able to contain my laughter.

They are still edgy. We’ve accidentally over-recruited because so many people have called friends to participate. Later, as Rachelle is escorting them in two by two’s to peel off the smoker who has conned his way into the group for an individual interview, the youngest 3 start becoming increasing visibly and vocally agitated, “Man, I don’t like this! They separatin’ us! We should be up!” [We should leave quickly.] and other utterances of someone wildly vacillating between staying and running in terror. One of the small one’s chest is sticking out, and I know he’s rigid with tension. I’m trying to coo at him and embody exhaling, “It’s gon be alright, hon – you’ll see. I know this is weird, but ain’t nothing bad gon’ happen. Go on, now.” He shoots me a look, and I feel strongly that if I weren’t there, he would have bolted already, even though I’m an oddity too, but it’s a grudging look, like, “All right. Imma try this.”

Follow
Phoenix Jackson
Phoenix Jackson is a researcher working with the Pacific Institute for Research and Evaluation, a Cornelius Hopper Diversity Award Fellow with the University of California of San Francisco, and a Somatic Counseling Psychotherapy graduate student at John F. Kennedy University.